Welcome to Red Tin Roof - one of the most alluring, fascinating and welcoming destinations in the Western Cape.

She is one of the grand old dames of the valley; a 100-and-something year-old manor house that guards Riebeek Kasteel's south-eastern entrance on Hermon Road. Her exact age is a mystery, courtesy of a fire that destroyed the building plans at Malmesbury municipality in the early part of the 20th century.

She's been sleeping guests, feeding strangers and quenching thirsts for almost two decades and as far as we can gather we are the fourth set of owners to open her doors. In doing so, we gave her a complete facelift.

We have re-vamped her from head to toe and decorated her with our eclectic mixture of art and collectibles that we have accumulated from around the world.

Don't be phased by chairman Mao looking down at you in the dining room. Be prepared to rub shoulders with Piet Retief in the passage or salute Mohammed Ali in the garden. In the bar a Vietnamese iron fist crushes an American B-2bomber. 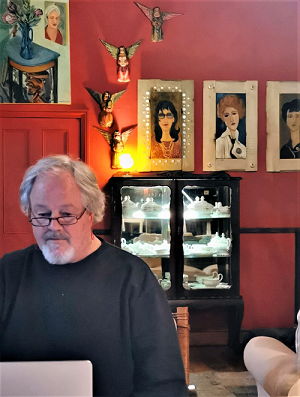 The owners of the Red Tin Roof are the author and journalist Jacques Pauw and former filmmaker and journalist Sam Rogers. Jacques and Sam are amongst the most prominent journalists in South Africa. They have between them won the CNN African Journalist of the Year competition four times. Sam has worked for some of the most prolific television networks in the world while Jacques has, amongst others, exposed police death squads at Vlakplaas. He has received some of the most coveted journalism awards in the world and is the author of six books.

At the end of 2016, Jacques left the Red Tin Roof’s kitchen to write South Africa’s best-selling non-fiction book, The President’s Keepers. The Red Tin Roof was cast into the spotlight in February 2018 when the Hawks raided Jacques’ office at the Red Tin Roof in search of classified intelligence and tax documents. They found nothing.